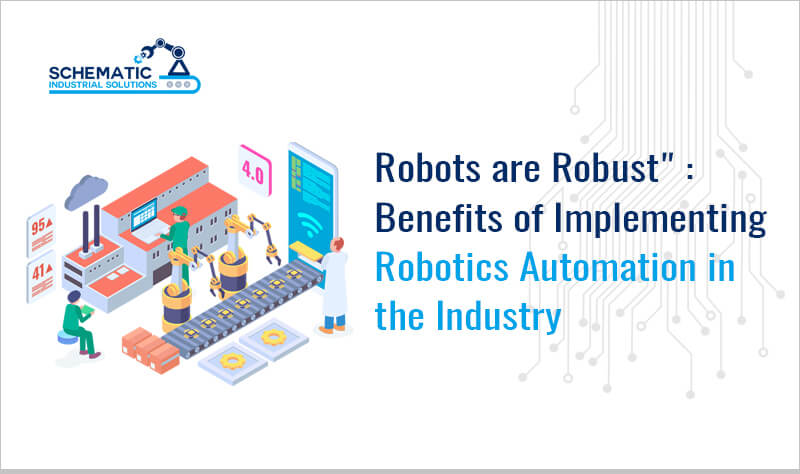 What does your mind perceive when you hear the term “Robot”? Technology, automation, science, circuits, programs, easy outcomes. A robot is a term which instils the emotions in our mind “anything that makes life easy”. With days and technological advancements, Robots have filled the gap between human and automation successfully. They bridge what is unreachable for normal flesh and bones. Be it an epidemic or pandemic, like the one we are going through now.

The reign of the virus and its dictatorship over normal people have taken a toll on the world. In such severe situations, where it is getting difficult for doctors to examine patients to abide by social distancing, robots have come to rescue. The same we can conclude for manufacturing industries where robots are lending a hand to factory workers in performing cumbersome tasks and increasing productivity. Let’s see what advantages have Robots brought to the world of automation and industry.

1. You don’t have to worry about safety much:

Edgy pieces of equipment, hot boilers, heavy machinery are such peculiar situation where a human won’t find it worth to risk his life, handling them can be dangerous too. Things may end up as fatal hazards or accidents. As far as safety is concerned, assigning these complex tasks to robots can be really helpful. The US Bureau of labour statistics says that the number of occupational hazards and injuries have considerably gone up over the years. Be it falls, machine guarding, powered industrial trucks. Workers and engineers handling electrical equipment are the ones who are under most of the severe risks. Such consequences call for an urgent need of automation robotics. It is always better to have a repair bill rather than a hospital bill or a bigger lawsuit.

The haste that they make is always good. Robots don’t have to work on time shifts. They don’t need lunch breaks, they don’t feel tired, they don’t have to go on vacations. Robots can help the workers regardless of no matter what. They are not going to feel stressed. They don’t have to attend scrum meetings and training sessions. The induction, training and meetings, this circle of time consumptions come down to null when it comes to robots. They have inbuilt-testing -modes and self-programmable abilities which help the organisation withstand heavy deadlines and achieve them faster.

3. You don’t have to compromise with the quality:

There are several repetitive tasks that robots are programmed for. Robots are highly sensitised with complex algorithms and coding. Robots are elaborated sensors which are equipped with high-quality cameras and microphone. They come with an advanced plug and play technologies with uncomputable capabilities which promise not only timely but quality delivery. Robots can work in unpredictable environments. They can detect defects which are beyond human comprehensions. They can spot a hidden leak in the equipment, detect harmful air quality, and so on. With perfect objective recall and unwavering focus, Robots are sure to deliver quality outcomes.

When the riskier jobs are already done by the robots, it comes as a relief to the workers since they don’t have to do the same tasks again and again. When the redundant tasks are carried out by machines, human intelligence can be utilised to cover up some more tasks which cant be occupied by machines. Instead of that, the workers can be deployed into other productive inventories, workplace projects. Without feeling burned out, they can attend workshops, qualitative wellness program and contribute to the other aspect of innovations and industrialisation. Apart from Industries, Robotics automation courses are gaining popularity among students who wants to pursue a career in this field.

5.No, they don’t take your job away, rather help in creating some:

This is a myth that there exists a chance of diminishing job opportunities for people if robots keep rising. No, it is not like that. Robots won’t take your job away; they just change the hierarchy of workflow for you. What will be a Robot do without human, the relation between Robot and Human is like a signal and its carrier. Human intervention is just a medium which bridges the two. The number of robots is proportional to the number of people. The more Robots deployed, the more number of people employed for its supervision and monitoring. So it is essential for students and prospective employees to get skilled in handling these machinery and study automation.

There are learning platforms for those who want to pursue a career in automation and instrumentation to help you understand the machinery better. There is no doubt that robots and human beings are not substitutes but complementary, where both can’t make it without each other. The power of automation and ease of robotics blended together gives the organisation an above strand, and an opportunity to stand higher in the market of industrialisation in every way possible.

Apply now for success
× Chat with us